For technical support, tips and tricks, suggestions, or any other information regarding the EViews model object.

I want to run a historical counterfactual with my model over a period in which actual data exists. Ideally I would feed through different series for the policy variable via the Scenarios override feature and then have the historical residuals still impact the rest of the model as originally estimated.

Is this possible? When I run a Scenario with various different policy scenarios (including the actual historical policy outcomes) I only ever get solutions that ignore the estimated historical residuals.

Or is this exercise just not possible in Eviews?
Top

In my model I have one control/policy variable (NCR) and a dependant variable of interest (LUR). The historical choices are shown in blue, alongside two scenarios I have solved.

I simulate two scenarios with NCR overridden as an exogenous variable. The first scenario (2001_1) sets the NCR to be exactly the same as its historical series. But when I solve this scenario I find the outcomes LUR (2001_1) diverge from the historical outcomes. I assume this is because when the scenario is solved it assumes all shocks are set to zero? If I set the exogenous variable to exactly match it's historical series shouldn't the scenario solution be the same? Is there some option I can select so this is the case? 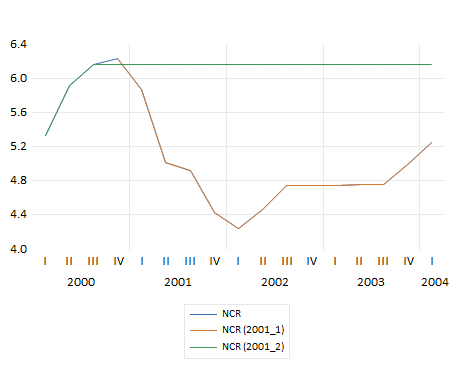 Furthermore when I run a Scenario in which the policy variable is fixed ata. constant level (2001_2), the scenario solution doesn't seem to take into residuals in 2001, but instead produces a smooth series.
Top

It's possible that overriding a variable while still using its previously solved values could produce different results for other endogenous series. I believe this outcome could arise if (1) the overridden variable were part of a recursive block of variables in the model, and (2) the system of equations encompassed by that block were under-specified. Since condition (1) is common enough, the real culprit is condition (2), which implies that the solution to the model is not unique. Disrupting the way in which that block is calculated by overriding said variable could be enough to generate a different, but equally correct, solution.

This is all assuming there isn't some bug at work. Would you be able to share your workfile with us? You don't necessarily need to do so publicly here on the forum, you may also email us at support@eviews.com.
Top
Post Reply
5 posts • Page 1 of 1

Users browsing this forum: No registered users and 5 guests