Here is the file. I think the changes are ok, but you may check.

I estimated about 60 GARCH equations, and using the EqSum add-in to summarise all the coefficient reuslts in one place ... However, I am not getting any F-statistics (says "N/A" for each equation) ... any idea how to fix this?

Also, I was wondering whether it would be possible to add a Wald test into the summary output?? Can I add this into the program code at all? Would be very helpful, as I need to do a coefficient restriction test for each equation, and I really don't want to do it manually about 300 times!

If you want to add the Wald statistics, you'll have to program it yourself, unfortunately.
Follow us on Twitter @IHSEViews
Top

I have created a workfile which contains a set of variables and a set of equations that have been saved for a set of 41 companies. My aim is to be able to transfer the outputs of the equations (several specifications for each company, >100 here even accounting for the nonvalid ones and further additions possible) not manually one by one by copying and pasting in Excel, but to kind of create one large table with all the estimated equations inside (I need coefficients, t-stats and P-values at least) or several such tables that would together cover all the equations and could be transferred to Excel.

After a thorough search for some helpful tool, I found the EqTabs add-in, I read everything I could find about it but so far I haven't managed to successfully use it. A description of my effort to use it, after downloading it and opening with EViews 6, together with sreenshots, is attached to the email as a MS Word file. I would appreciate your help in either enabling me to use this tool to achieve my aim, or any other method that would help achieve my aim. Doing the operations described above manually is not an option for me since the number of equations is expected to increase and some more automatic way would be the only thing that could save me:-). I can send the workfile as well if that's helpful

Thank you very much in advance!

All EViews add-ins require EViews 7.1 or above, and cannot be used with the Student Version.
Follow us on Twitter @IHSEViews
Top

Sorry 4 posting with delay about this but why does the add-in not include all the independent variables in the equations but just the first one? is it only happening for me? I have re-installed the add-in just today but I don't seem to get any improvement on this

Could you explain in more detail? I don't understand what you're saying.
Follow us on Twitter @IHSEViews
Top

Sure I can, sorry!

Is it clearer now? it only seems to be a bug in the add-in or something but maybe it is not so difficult to fix...
Top

Must be something specific to your workfile/equations. I just ran it, and it listed all regressors.
Follow us on Twitter @IHSEViews
Top

Thanks. This is a very handy add-in.

I have one comment and one requests:
1) use @rbar2 instead of @r2. (of course, users can easily fix this)
2) Add a "transposed" version. Columns are variables, obs and R2; rows are equations (with std.error or t-stats below)

I have attached a file that contains a modified version of the eqsumtab.prg add-in program.

The modified program produces Adjusted R-Squared, instead of R-Squared.

The only modifications made are to the label in the GUI, which now reads 'Adj. R-Squared', and to the called “@-function” is now @rbar2 instead of @r2.

This is just a personal preference of mine for output tables.

Can I add add forecast and residual series to the Equation Summary program show it will show in the equation columns, below the results and R-square? So that a single column contains an Equation Result, then the Forecast Series, and then the Residuals Series below. These are forecasts and residual series were created from the equation using .forecast and .makeresids, so they are kind of like children of the equation. I thought perhaps I could use an associated data member, but I do not see that as an option in the Series Data Members, and I don't see an Equation Data Member, but I could be missing it. I am attaching a (really rough) mock-up of what I have in mind in case it will help paint a picture of what I want to do. Any advice would be appreciated!

I have only worked with EViews for about 6 months but I love it.

I made two other changes to the Eq Summ program - I added the p-values to the coefficients (listed under the t-stat), added a 10-percent significance level (I did notice somebody else did that a couple of years ago

), and I added the DW stat below the R-square. 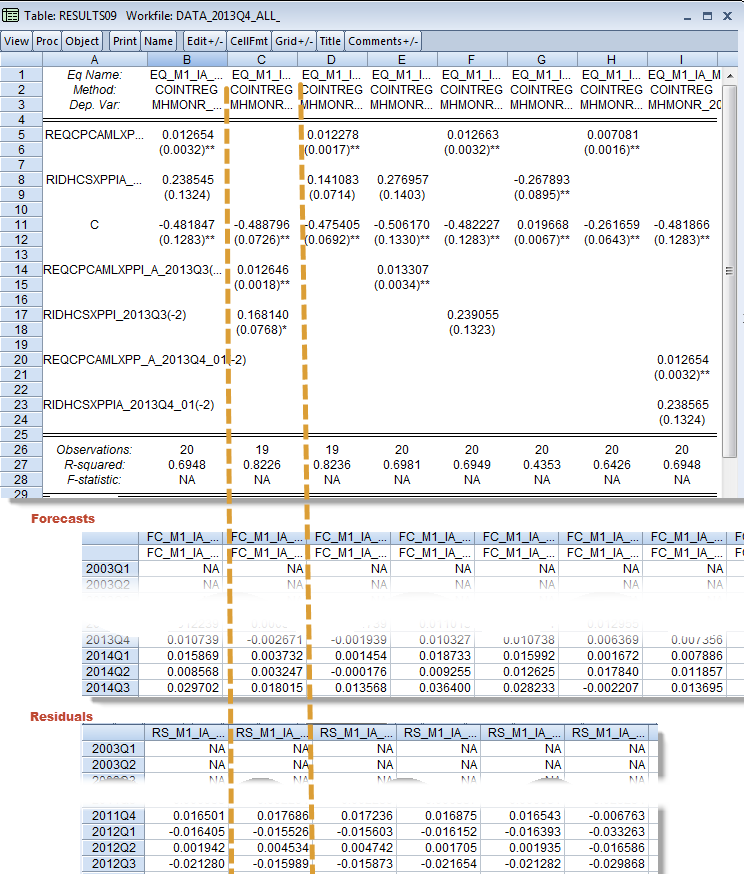 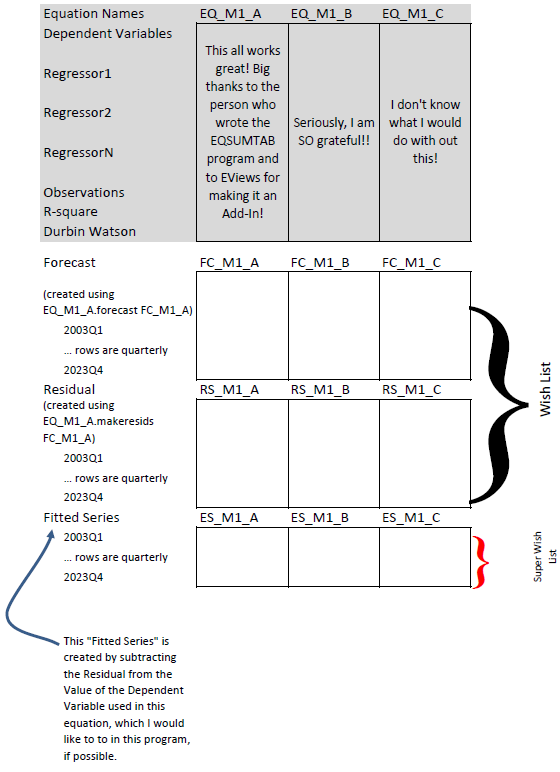 You'd have to program it yourself. The reason that forecast and residuals aren't datamembers is that they require extra calculations, and options. They are not stored with the equation by default, but are recalculated every time you do .forecast or makeresid.

What you'll have to do is add a line that forecasts from each equation (eq.forecast yf), then freeze the sheet view of the resultant forecast series into a table, then extract that table into the summary table. The only tricky bit will be getting the sizing/placement of the table correct. Finicky.
Follow us on Twitter @IHSEViews
Top
Post Reply
36 posts

Users browsing this forum: No registered users and 8 guests