I'm following this tutorial on how to create rolling estimates from eviews blog http://blog.eviews.com/2016/02/rolling- ... 1390666730 but I haven't been successful in replicating the steps. Could anyone help?

I installed ROLL plug in and it says I have v. 1.3. and my eviews version is eviews 10 univ edition.

For some reason I don't have some of the prompts. For example, I don't have this "View/View rolling coefficient statistics" prompt/options. 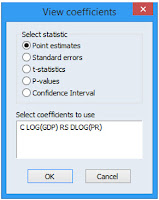 Since I don't even have the prompt, I can't even do this: "Since we would like to see the fluctuations in the coefficients over the sample period, select Point estimates and Standard errors"

Also, some of the options aren't available. For example, I can't create a new object for "roll". 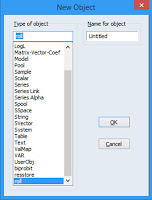 Can someone point me in the right direction?

Users browsing this forum: No registered users and 4 guests