And the evaluation of the results yields the followinf. The problem is the model never predicts and 0's it just predicts -1 and 1 values... What is wrong? 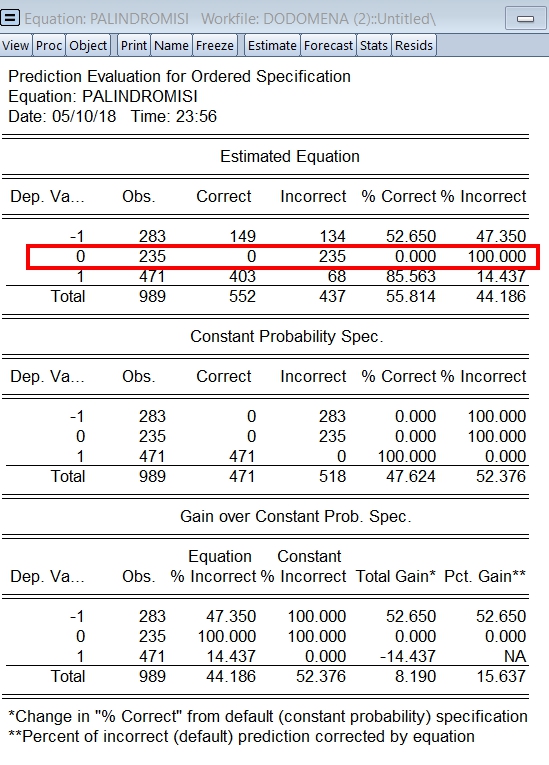 Thank you Glenn for the response!

So what can I do now to fix this? ie get a more realistic model that predicts all three states?
Top

The model is what it is. If you have a better model, then you can use it instead. Adding explanatory variables may help, but that may lead to overfitting.

And in a case where 99% of observations have the same response, there is not much that one case do.

You may want to generate the individual response probabilities and work with them directly instead of just looking to see which one has the highest value.
Top

EViews Glenn wrote:And in a case where 99% of observations have the same response, there is not much that one case do.

And yet there are no "0" predictions by the model...This seems very strange to me...
Top

The 99% was a generic comment, not specific to your data (which I haven't seen).

What I'd recommend is that you make a model from your equation and solve for the fitted probabilities and examine them. I do note that your 0 category is the least frequent, and though you most certainly have fitted probabilities that are non-zero, it is not out of the realm of possibility that it is never the highest predicted probability category. Notice that the effect of adding the regressors is to move some predictions from 1 to -1.
Top

Users browsing this forum: No registered users and 11 guests