I am using the FRB/US package to model simulations. The "longbase.edb" database (contained in the FRB/US dataset) has data on several macroeconomic variables. But I don't think it has data on employment-to-population ratio. I imported this data from FRED from 1975 Q1 to 2020 Q1 in the workfile and called it "epop". called However, the range of other data for all the variables is from 1975 Q1 to 2030 Q4, how will I get the values for post- 2020Q1 time period? So far, I 've started working with data from 1975 Q1 to 2020 Q1 as I am trying to make simulations only for the years 2012-2013.

Furthermore, I am trying to run the program simulation example 4 from the "programs" folder in "frbus_package". Towards the end are the following lines of code which I don't understand :

What exactly does %sufsim = "_1" mean? This is relevant in the following : 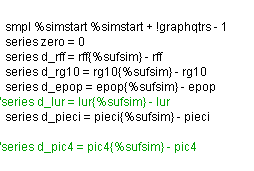 In the line of code which says: series d_epop = epop{%sufsim} - epop , I was getting the following error message:

I would appreciate it if someone could help resolve the error.
Top

Regarding future data, if you can't find someone else's forecast, you can always make your own. Many of the series bundled with the FRB/US model simply use the last known value for all future values.

Regarding the %sufsim = "_1" line, if you look at how that program variable is used in the model scenario procedure you'll see that it defines the scenario alias. When the model is subsequently solved, the solved endogenous variable series all have that suffix. The error message about epop_1 suggest you have not added epop to the model as an endogenous variable, thus epop_1 is never created.
Top

Thanks, Matt for the response.One last question:

In the line of which states:

Users browsing this forum: No registered users and 8 guests