For posting your own programs to share with others

I found out that the coefficient matrix does give enough entries. With 372 obs and a window of 50 the coef matrix gives 322 entries.
So the only problems I have are with the fcast series.

I see that the spreadsheet for "fcast" presents its output from the 24th entry.

So what do I do wrong? Here is a screenshot where you can clearly see the spreadsheet from the 13th entry 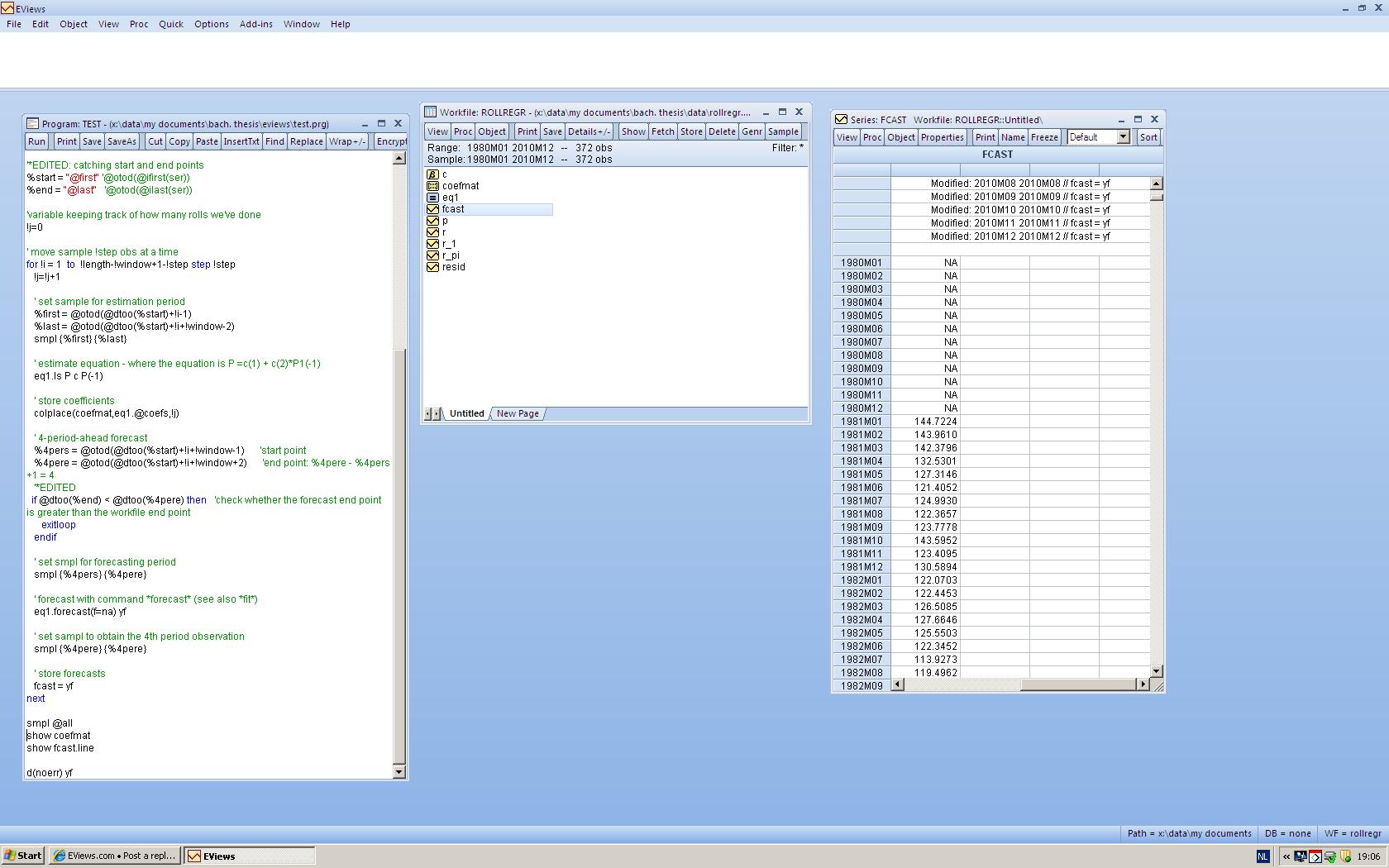 Please delete the fcast series before running the program?
Top

That should do it, I'm sorry for the inconvenience!
Top

i am trying to do a GARCH (1,1) dynamic forecast, with a rolling window which overlaps. I have 1015 daily observations, and would like to use the past 500days data to forecast the variance for next 21 days. and this is then repeated by moving the window one day forward, such that the no. of days used in forecasting, and forecasted data have same length.

I am using eviews 5, have tried to replicate this using Esther's code for 4 step ahead rolling regression. However, i am getting zeros as my results.

Attached is the code which i have done so far and workfile.

Can someone pls shed some light on how to correct this pls?

Thank you very much.

I appreciate any help.

could you please help me check if the programme is correct?

I changed couple of things for my basic rolling forecast

forecast data.wf1
the original page indicates all orginal data ( log diff) , the f1 page is the data adjusted by me and ready to go...
(107.7 KiB) Downloaded 369 times

create u 800 'will create undated workfile with 800 observations
usdaud = nrnd
usoil = nrnd
Since you have your workfile (i.e. 01 FORECAST) with the monthly data, these lines can be ignored.

Since you are trying to do 1-period ahead forecast, the following lines should be included in your code.

Many thanks for your correction.

Please see below as I tidy up the whole code:

Please let me know if there is anything else I need to correct? felt

Before you said it cos mine is 1 period 1 period forecasting... i dnt understand why there is a 4th period ?
Please could you explain? thanks

Many thanks for the help with the code, it works!!!!

You know if you manually forecast 1 period, the fcast graph showed on eviews have information contains " RMSE" and

What should I change if I want to store the RMSE information?

Users browsing this forum: No registered users and 1 guest